As you (hopefully!) know, I have moved my livestreams to Twitch only! After moving my live content to solely on twitch I did decide to accept affiliate status there! That means you can subscribe to me on Twitch which gets you the use of some cool emotes in chat as well a special rank and room unlock in my discord server!

I did actually get the achievement already that allows me to apply for partnership, and am crazy close to where I really believe I will be accepted. That’s what has caused this crazy idea to do a month long partner push!

All during my partner push (month of November) I will be doing giveaways at set viewer counts! These will generally be set weekly, but can be different per stream. This means WAY more giveaways than normal!

What happens if I get partner?

If I get partner it means I’ll actually be able to allow you to use all those other cool Bizz emotes I have, and possibly change my emote prefix!! Being a partner allows more emotes depending on sub points, rather than only 1 emote per tier as I have now. Being a twitch partner will also ensure I always have transcoding available. This means I’ll be able to stream very high quality (1080 60fps) for those who have the internet that can handle it, but there will ALWAYS be lower quality options for those to watch with internet not as good. Plus of course a few other things such as better support.

If you’d like to help, it’s super easy! All you need to do is tune into my streams, and if you like, chat up a storm to welcome other new viewers! Sharing my stream link with people you know who may enjoy it or via social media would also be a big help! Twitch.tv/MrsBizz

I am working on an exciting and top secret idea, that is bigger than anything I’ve ever taken on before! It will involve multiple prerecorded YouTube videos, hours of research and testing, 2 lengthy livestreams, super fancy art, and amazing fans and viewers like you!

If you would like to be one of the first to find out what the plan is – as well as having first dibs on being part of it – sign up for my guild on ESO Raid Planner!

To be completely and totally involved in all aspects – you will need to have ESO for PC and have a character on the NA server. Of course, even if you play on another platform you will be able to watch the videos and livestreams!

Secondly, you will want to join my Discord server! Once I get a bit closer to announcing my plans a very very secret room will be unveiled for those who joined my raidplanner guild prior to the plans unveiling – with many details! Click here to join my discord!

Hey! Just to let you know, real life will be crazy for me in the coming weeks, so I’m changing up the stream a bit. I will still be streaming every Friday night at 11pm eastern at gaming.youtube.com/missbizz/live but I will only be streaming ESO! There will be no Skyrim or Fallout 4 streams until June 16th. I just don’t have much time in the coming weeks to play ESO in my free time… so I’m dedicating more stream time to you!

If you’re a Bizzygoat (a gamewisp subscriber) you already saw the video a couple days ago, but for the majority of folks it went live today! If you would like a sneak peak at my monthly channel update early, as well early access to my “short” let’s play on youtube you can sign up for the appropriate Bizzygoat tier!

This month it’s looking like I will be finishing Let’s Play ESO: Orsinium and Let’s Play Journal! That means goodies in the form of new Let’s Plays on Youtube and messing up my schedule!

Journal is currently my short Let’s Play and I already plan on replacing it with The Cave! The Cave was a game suggested for a fantastic Youtube subscriber quite awhile back! This will be my first Let’s Play on youtube that will not feature a facecam. The Cave will be taking up Journal’s slot on Saturdays!

ESO Orsinium isn’t exactly being replaced yet. I’m between a couple games I want to play next as my “medium-sized” Let’s Play so I have something different planned. I would like to build up my Let’s Try playlist! Let’s Try is my playlist full of one episode Let’s Plays where I’m just checking out a game and playing it, and will wait for you guys to vote on if I should stream it, youtube it, or forget it! I’m not sure how many I’ll make but hopefully I’ll figure out a good medium let’s play to replace ESO Orsinium with by the end of March! Oh, Let’s Try episodes will be showing on Wednesdays and Fridays!

Oh wait. What about Sunday? Sunday was an ESO Orsinium day too you know!

I’ve got a special surprise for you! Once ESO Orsinium completes I will be replacing the Sunday episode with… *drumroll* another Skyrim episode! Hoorah! You guys have been asking non-stop for more Skyrim and I’d love to be able to get farther in it faster.. so it’s coming! Skyrim will start having 3 episodes per week instead of two!

Speaking of Skyrim. One day, that let’s play will end. I don’t think that will be anytime soon, but it will happen at some point. I’d love to know what long let’s play you guys want to see! I have a poll up here on MissBizzPlays.com (look on the right hand side.. scroll down a bit maybe). These are some games I’m considering right now.  Be sure to vote so your say is taken into account! As well, BizzyGoat subscribers will be given a second vote when Skyrim is winding down!

Oh! Something I missed in the video. I’ll be releasing three new ESO Guides this month! The first one will be a new (and updated) Grouping Tool guide including all the new features coming with the Thieves Guild DLC, and a Quick & Basic Blacksmithing guide! The third guide will be released in late March and is a surprise!

What’s new with the Twitch stream? Well! I’m not changing a whole lot. I still am streaming 3 times per week (You can see my schedule here), and at the same times. I’ll be keeping up with the amazing Elder Scrolls Online on Wednesday’s and Friday’s, but will have a schedule of it’s own for Sundays!

First and foremost remember that The Elder Scrolls Online brand new Thieves Guild DLC comes out on March 7th! I’ll definitely be playing through this DLC on stream – as I won’t be doing a full let’s play of it.

Secondly, Sundays now have a plan! I’ll be alternating between Alan Wake and Fallout 4 for Sunday streams. I kind of hope I get my shit together and hook up my PS3 so I can squeeze in a stream of Beyond: Two Souls.. but that’s not for sure! You can be sure you’ll see some awesome Fallout 4 gameplay though, and some spooky Alan Wake!

That’s my plan for March! Oh, and my birthday is this month too 🙂

Good day! I would like you to meet Miss Audrey-Sunshine Lucy! As you (should) know, I recently held a poll on what name I should choose for the Fallout 4 character I will be playing on stream! According to twitter Lucy won, but counting 2 votes from Discord… Audrey tied for the win. Well, the whole point of choosing one of those names was so that Codswell would say it! He will say all 3 of those names, BUT if you use multiple he will always say the last name! So we gave her the first name Audrey, and the last name Lucy. 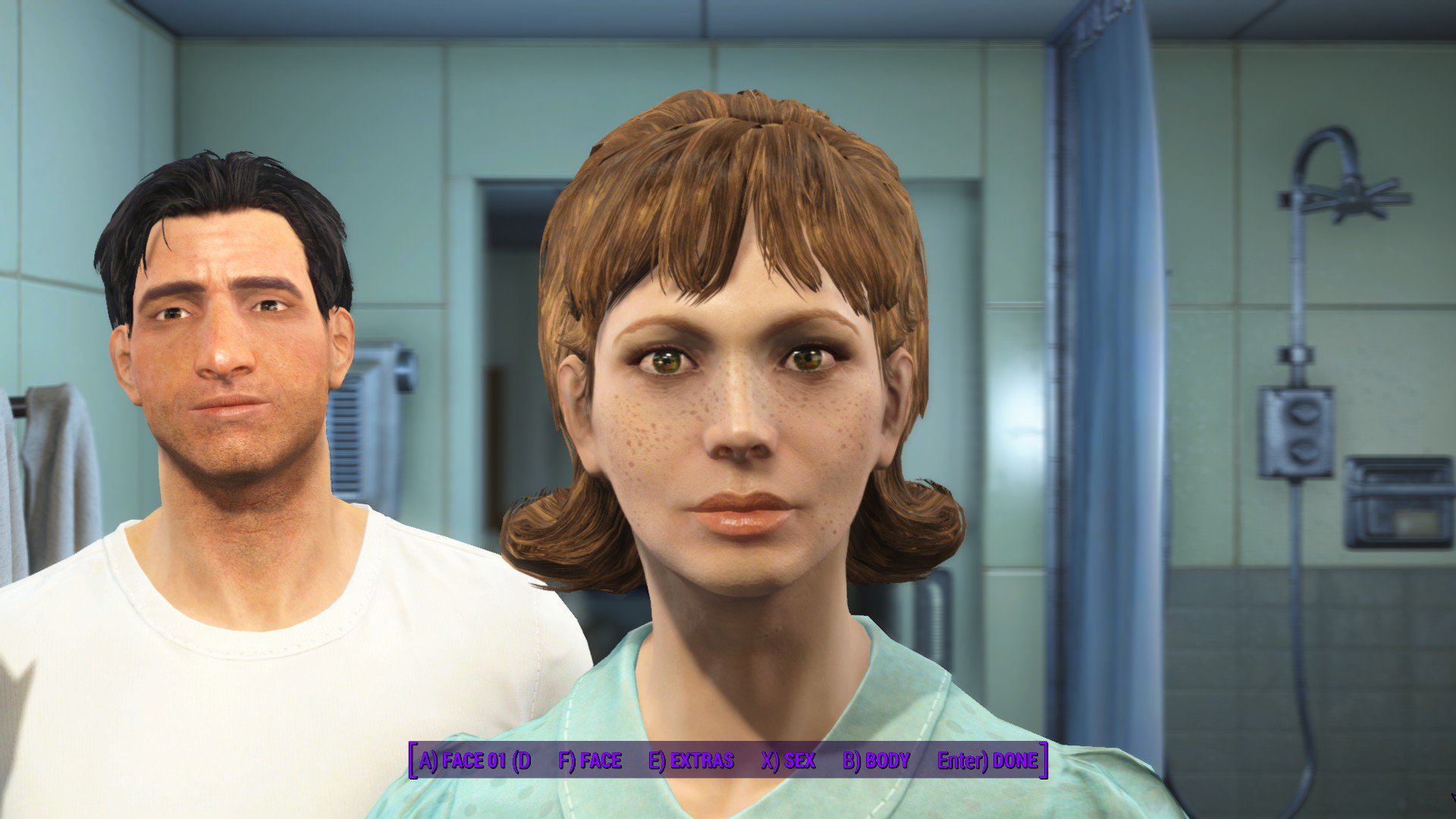 I held a special stream yesterday (it’s not my usual day) and we drank some morning coffee and created her! We spent approximately 2.5 hours perfecting Miss. Lucy, ensuring she fit her name as well as what I had envisioned her as! Hope you enjoy seeing her adventure through the wasteland! The next Fallout 4 stream will be February 28th! http://www.twitch.tv/miss_bizz

Well, as you saw in my earlier post about the Steam Lunar Sale, I purchased Alan Wake! Since we are in the midst of choosing a Fallout 4 character name that I still need to create (and am working on  a custom overlay for it) we’re going to get into Alan Wake!

I will be playing Alan Wake on Twitch this Sunday – February  21st at 1pm EST! Don’t miss it!

I’ll tell you my story about this game. A long time ago I watched my now ex-boyfriend play this game, it was interesting and I liked it. Of course I didn’t watch the whole game through, so I don’t know the full story. I then was able to try it out again recently… and I played it alone, in the dark.. at 10pm. Welp, I didn’t even make it through the first portion of the game where it’s a bit like a “tutorial” explaining what to do! I screamed and just too scared!

I’m hoping playing it on a Sunday mid-day will allow me to actually play it!

Come join in the fun! Twitch.tv/miss_bizz

Error type: "Forbidden". Error message: "The request cannot be completed because you have exceeded your quota." Domain: "youtube.quota". Reason: "quotaExceeded".

Did you added your own Google API key? Look at the help.

Check in YouTube if the id UCrVBB-ecSJdwHGYH264c6mA belongs to a channelid. Check the FAQ of the plugin or send error messages to support.

Many (but not all) of the links to items to purchase on my website (MissBizzPlays.com) are affiliate links. This means if you click on the link and proceed to make a purchase, I make a small commission. Click here to learn more!

We are a participant in the Amazon Associates Program, an affiliate advertising program designed to provide a means for us to earn fees by linking to Amazon and affiliated sites.